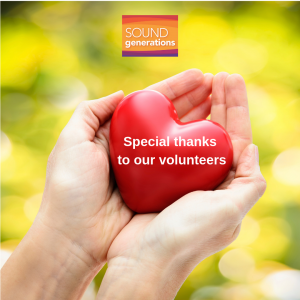 Our programs at Sound Generations and our Community Partner Sites across King County would not be made possible without the compassion, dedication and countless hours that our volunteers put in. Please sign up today and make a difference within your community. From the bottom of our hearts, THANK YOU!

Norah Erwin-Stewart, Information & Advocacy Director:
“Volunteers enable us to stretch our program’s reach further, and inspire us to work better; our volunteers are at the heart of everything we do!”

Volunteer Transportation:
“I have laughed with some of them, learned from some of them, and for others have simply lent a sympathetic ear…I started out wanting to be of service to my community. It turns out that volunteering with Sound Generations has been beneficial to me also. Making new friends, learning from them, and providing a much needed service, how can you beat that!” – Jean Fielder, Volunteer Transportation driver

“It’s a pleasure working with so many committed and dedicated volunteers who genuinely care about the lives of seniors in their communities.” – Volunteer Transportation Team

Meals on Wheels:
“We are grateful to our 300+ Meals on Wheels volunteers that not only help provide nutritious meals but offer our participants a connection to the community. We’ve had many participants tell us how much they look forward to seeing and speaking with the volunteers each week, some have even shared it’s their reason for getting dressed that day.”

“I would like to thank the (volunteer) delivery drivers – they are very friendly, taking time to chat with me, checking to see how I am doing, they brighten my day.” – Meals on Wheels client

Health & Wellness:
“Our volunteers enable us to provide workshops and classes all over King County that help support older adults and those with chronic health conditions remain independent and live healthy lives.”

Community Dining:
“Our program would not be possible without the dedicated and hardworking volunteers who are the essential part of the program. Our volunteers make a difference!”

Hyde Shuttle:
“We appreciate our Hyde Shuttle volunteer drivers who donate their time and care to our Shoreline and Sno-Valley communities.”

“You only need a heart full of grace.
A soul generated by love.” – Martin Luther King, Jr.

We THANK YOU for your support and love of older adults.

Because of your investments, older adults are supported and included in a caring community of connections and accessible services.

P.S. – Check out sweet #handmade cards crafted for our Meals On Wheels participants. What a way to make our clients feel special today! Thanks to the volunteers & UW Alpha Gamma Delta.

Workers had the option to wait out the storm, but King County’s Meals on Wheels took to the streets anyway.

While public schools, the courts and garbage collection all paused for the snow again Tuesday, Fai Matthews and her small team of Meals on Wheels delivery drivers went to work, loading frozen meatballs and omelets into the backs of the vans that deliver them to homes throughout the county.

With the weight of the meals resting on the rear axle of the rear-wheel drive vehicles, Matthews, wearing a brightly colored hair wrap that popped against the graying snow, made a point to call each of her clients before departing. It was a warning of sorts that her team would be knocking on doors today, despite the snow. On Monday, a client was so surprised by one of the delivery people, she assumed he was trying to break in.

“This is Fai from Meals on Wheels, just letting you know we’ll be delivering today,” she said. “Yes, that’s right.”

The promised snowfall delivered, exceeding a foot in many places around Puget Sound. The roads emptied, buses changed their routes and the city, as it often does in inclement weather, ground to a halt, leaving the vast majority of the city’s residents to stay home and watch the falling white and wet substance accumulate.

Meals on Wheels is a national program and serves 2,200 individuals in King County each year. It’s housed locally in Sound Generations, a nonprofit agency that helps seniors through a variety of programs. The agency receives federal and philanthropic funding. On Monday, it shuttered some of its functions due to weather.

But not this crew.

Monday was an important day to complete deliveries; many seniors had not received their drop-off the Monday before, following the first of four snowstorms that would cover the region. Missing another would mean some clients would go three weeks without a delivery.

Matthews, 65 and with a booming laugh, got stuck only once during her south Seattle route on Monday — passers-by with shovels quickly dug her out, she said. There was little question she’d run her north Seattle route Tuesday.

From a warehouse in SoDo, drivers fan out across King County — north to Shoreline, east to Mercer Island, south as far as Federal Way. At each delivery, clients receive two weeks’ worth of food, portioned on disposable trays, shrink wrapped and frozen. The meals spoon together in thick coolers, although with the temperatures outside, it was no challenge keeping them frozen.

For some of the seniors over 60 who receive meals, it’s more than a delivery — it’s also a wellness check of sorts. Only those who have trouble shopping for themselves qualify for the program, which often means the recipients have trouble doing other things as well.

That motivated the crew through the snow.

“I grew up kind of poor, so I know what it’s like to miss a meal,” said Julian Montgomery, a driver of six years. “But the difference is I can get up and make myself something to eat or go out and get something. These people can’t even get out in the sunshine.”

As the snow began falling over the weekend, the drivers called about 80 clients. They asked who was running low on food. One diabetic man said he was concerned about his dwindling supplies, so he was moved to the top of the list.

By 9:30 a.m. Tuesday, a line of vans squelched their way onto the wet pavement from the Spokane Street warehouse. Without checking GPS, Matthews dipped into the new State Route 99 tunnel, which was dry.

The snow had changed to rain Monday night. So while the main roads were clear, the side streets had turned to slush. Matthews has done this job for 11 years now and was a mail delivery driver before that, so she has seen Seattle’s streets in a lot of different conditions. They’ve never been quite this bad, she said.

She got stuck in an intersection on her way to the first delivery. Two people walking by recommended she put her floor mats beneath her wheels. She did and with their pushing, the van lurched forward. She got stuck again as she was leaving the same delivery and again on her way to Phinney Ridge. On a road north of Greenwood, her wheels sunk so deep that a man with a backhoe needed to pull her to a clear street.

Each time, Matthews would thank her helpers. But when they learned what she was doing, they would end up thanking her instead.

In a show of camaraderie, a passing mail deliverer, in the midst of her own struggle against the elements, shouted to Matthews through her side door: “I’m not going to let this ruin 10 years of sobriety.”

After each battle with the slush, Matthews would position her car just out of the way of traffic and stomp her way to her client’s door. “Meals on Wheels!” she’d shout, in a commanding but inviting voice. And each time, the recipient would express amazement she’d made it there at all.

Due to the inclement weather, Sound Generations was unable to deliver most of our services on Monday, February 11 and Tuesday, February 12, 2019.

However, during these times we have clients that rely on our services.  King 5 produced a story on The Effects of Adverse Weather Conditions on Seniors.  Watch the coverage on one of our volunteers and our Meals on Wheels Program.

Meals on Wheels brings nutritious frozen meals directly to the homes of qualifying seniors who have difficulty shopping or preparing food. Our friendly staff and volunteers put care into their work: from the delivery drivers who know each customer by name to the customer service representative who gives personal attention while taking orders.

Watch the video below to see what it’s like to be a Sound Generations’ Meals on Wheels’ driver. Julian Montgomery speaks about the multiple roles he wears and the amazing friendships that have been built over the past six years.

Being a driver for our program is so much more than transporting meals. Julian sees himself as a therapist, counselor, friend, and a family member for his clients as well.

For more information about our Meals on Wheels program, visit: https://soundgenerations.org/get-help/food/meals-on-wheels/

Make a difference in the lives of King County seniors with a gift to Sound Generations TODAY!

All of us at Sound Generations hope that you and your family had a nice holiday last week, and that you scored some amazing deals on Black Friday and yesterday on Cyber Monday.

We thank you in advance for supporting people on their aging journey through community connections and accessible services #GivingTuesday!

Make a gift to Sound Generations!

The most comprehensive non-profit in King County serving older adults, Sound Generations is a necessary and supportive entity to ensure seniors have access to basic necessities that improve their quality of life. Your support on #GivingTuesday and throughout the year sustains our work and helps ensure that we remain the important caring community for seniors that they need. While you’re thinking about what gifts to purchases, many seniors are worried about what their next meal will be.

Don’t believe us, read what our Meals on Wheels clients have to say:

“I don’t cook anymore and it’s hard to get to the store. I have arthritis, asthma, and diabetes which limits my ability to get food. MOW changed my life. I’m extremely grateful.“

“We have been using your services for a few years and I can’t tell you how much we appreciate this service being available. I work full-time so it’s a challenge to get Mom to her appointments but this service allows me to reduce the hours I have to be away from my job. Mom really enjoys the social interaction with the drivers.“

Make a gift to Sound Generations!

Help us maintain vital services for older adults and launch into 2020 with the strongest possible start!

Please make an investment in your community by #GIVINGTUESDAY to Sound Generations. 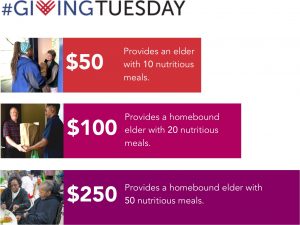 P.S. Donating is now even easier from the convenience of your mobile device.
Text SGGIVINGTUESDAY to 41444
– or –
help us spread the word by creating your own Facebook fundraiser for Sound Generations today, and Facebook and PayPal will match your #GivingTuesday donations!

Join our 3rd Annual Meals on Wheels Drive by shopping at Uwajimaya Renton from now until Nov. 16th for an opportunity to make a difference in the lives of older adults & adults with disabilities this holiday season. We hope to see you there! 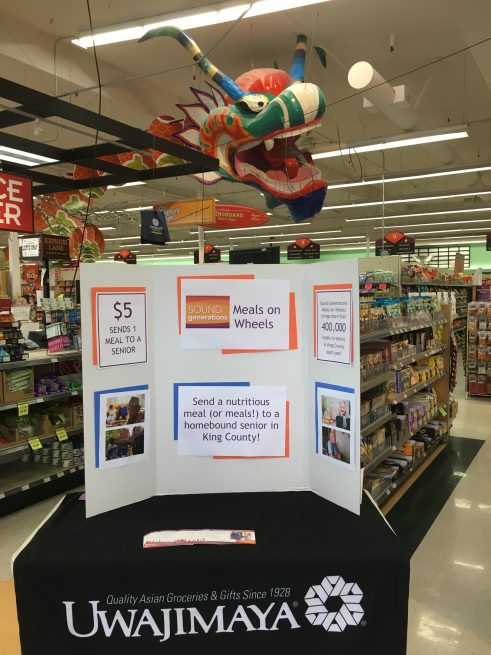